welcome to the fest

PSA: Do Not Feed The Trolls

PSA: Do Not Feed The Trolls 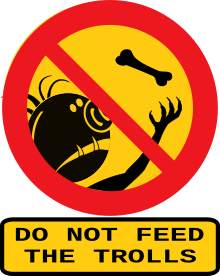 I think we all know this, but a fair warning for newbies: do not waste your time with those desperate people that sometimes come here and try to rekindle pointless feuds about the purpose of this forum or whatever.

They have no bussiness here and we own them no attention.

Like Tat anounced on the sticky note, if proven to be trolls or act against the rules they will have their profile deleted. So, let that mess alone.

This has been a PSA.

Thank you.
by Z6IIAB
since we'll probably engage with some haters as of now, just uping this reminder.

by October
If it seems like someone is speaking in something akin to good faith - even if it's just a facade that later becomes clear - I will respond. Obvious trolls get ignored. There are some easy 'tells'. Like slurs.

October wrote:If it seems like someone is speaking in something akin to good faith - even if it's just a facade that later becomes clear - I will respond. Obvious trolls get ignored. There are some easy 'tells'. Like slurs.

sounds fair, you're all set ^^
by Z6IIAB
sigh, while I admit I did feed that guy, yes, SSmotzer was a pretty obvious troll. from the desingenous "questioning" approach to the condesceding twisting-our-words and unflexible tone lol
by October
The delusion is what finally crossed the line for me on him.
by Z6IIAB
upping this again because we have another "dissapointed fan" spouting those same old vitriolic anti-radfem lies (biological essentialism! MRAs! trans people are more oppressed! VaLIDaTe Us!!!!) that we grew tired of hearing. just ignore their tantrum and carry on.
by gyrfox
Does anyone know if some percentage of the trolls speaking to the anti-radfem POV (here or elsewhere this topic is discussed) are professional trolls?

It feels nowadays like any discussion of how people feel on a divisive topic isn't complete without assessing the breakdown between:


Pretty sure I've seen B and C both here and elsewhere. Does anyone know if we have professional/impartial trolls paying attention to this topic as well?
by Z6IIAB
I think the term "professional troll" is fucking hilarious. If one of them came out as a "professional troll" I'd be laughing for days!

I guess I agree most of them trolls are B and C. And maybe misogynistic homophobic jerks who like to pretend they are white knighting anyone lol.
by pingupingu
Worth remembering that there is that sect of people who delight in being cruel and get kicks from 'triggering' other people, and who - like lampreys - attach themselves to any issue that is gaining traction or attention. They don't even care which side they "support" so long as others are incensed, frustrated, or hurt. They don't care about arguments or attitudes or beliefs, and will use any tactic that proves useful in that goal.
by Z6IIAB

pingupingu wrote:Worth remembering that there is that sect of people who delight in being cruel and get kicks from 'triggering' other people, and who - like lampreys - attach themselves to any issue that is gaining traction or attention. They don't even care which side they "support" so long as others are incensed, frustrated, or hurt. They don't care about arguments or attitudes or beliefs, and will use any tactic that proves useful in that goal.

oh yeah, original flavor trolls. they are so pathetic and so outdated tho. anyone who knows his/her way in the internet knows how to deal with those. I think the problem are the ones that porpusely go to places to stated lies and promote harmful narrative - like some of the ones that came here to defend the porn and prostitution industrie. Or the ones that came here to yell at us for understanding surgeries and hormonization harms people.
by October
Woo, they're swarming. Doing all I can to fight the urge to engage...
by Mama Immo
I've been biting my tongue on this for a while, but...

You do all know that someone can have a differing opinion and/or generally disagree with you without being a troll, right?

Being critical of something is not inherently trolling. People are often critical of things they LIKE because they are invested in it.

The most active threads I've seen on here all have some degree of debate to them, but they also mostly have the same trend of ultimately declaring one or more people "trolls" and halting the conversation in it's tracks.

Overall this forum seems rather inclined to be a vacuum chamber.
by gyrfox
*Sigh* Indeed. And in fact, I don't actually think this:


well-meaning folks who feel under attack

I think such people can be disingenuous, or unwilling to come to the table for meaningful discussion...but to call them trolls is warping the meaning of a troll.

I *do* think we're seeing people who sign up only for the purposes of arguing about one specific topic, who aren't otherwise interested in joining the community. Which might not be The Worst, if they were genuinely interested in keeping an open mind on the one topic they want to discuss. But I've seen the "pretend to be open minded" ploy deployed (hah, totally meant that pun) used often enough that I get why the label "troll!" gets slapped on.
by scruffy
I was going to just stay quiet but honestly, here's the tea folks. Literally the only reason this forum exists is because Celinia couldn't hold her own in an open forum. She would post in the "old" forum tatsuya references people could go to if they aren't happy with this message (incidentally that forum got closed down like a week after he made that post, his right but lets not pretend its not a dick move to blow up a community that existed since the keenspot days of the comic because your golden child felt disrespected by it). Every time she'd post her opinion she'd get blown the hell out by swathes of referenced and sourced links from multiple biological, sociological, and psychological experts.

Eventually Tatsuya got tired of his cheerleader getting humiliated in an open forum and created a place for her to be mod in. A huge portion of these so called "trolls" are just people who followed the comic for years, confused at the change in tone, and confused at the difference between the prior forum that welcomed basically anyone who could back up their opinions and deal with being challenged, and the current one, where a difference of opinion leads to a ban. This tumblr has pretty much all the tea about our sole mod, the hanging with actual neonazi's the defense of casual racism, the blocking sprees when challenged on it. Not all the tea, but a lot of it.

The cold hard truth of the matter is, without the "trolls" this community would be limited to the people Celinia could beg to come here after blowing up her friend group on Tumblr, Tat's patreon is going to continue to drop as his former supporters check in and realize exactly what he's become, and the forum for his comic has gone from a place where you could find various actual experts in finance, medicine, and biology to a place where you agree with a certain poster or you're a troll and banned.
All times are UTC-07:00
Page 1 of 3
Powered by phpBB® Forum Software © phpBB Limited
https://www.phpbb.com/